Ms Uduk noted that the implementation of the 10-year capital market Master plan is already contributing to the growth and development of the Nigerian capital market, and by extension, the economy.

Speaking further she said” Beyond capital market’s contribution to economic growth, we aim at the larger goal of economic development. Added to increased production, the latter entails advancement in the quality of life and living standards of citizens in areas such as improvements in literacy, health and life expectancy, better savings/investment culture, financial inclusion, as well as improved wealth distribution, housing and environment”.

The conference which is a collaboration between the capital market and local academia brought together students, lecturers and stakeholders in the market.

The Acting DG SEC believed financial innovation is important for the conception and delivery of a dynamic industrial society.

She made a strong case for market participants and regulators to continually familiarize themselves with the rapid and ever-changing economic, regulatory and business environment.

Looking at the market ecosystem, Uduk emphasized the need to continuously embrace innovation, to enable seamless market operations and regulation.

The event was hosted by the Department of Finance of the University of Lagos, with the Head of Department, Professor Ayo Olowe, relishing a strategic partnership between the academia and the domestic capital market. 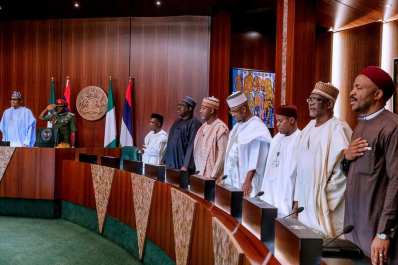 The Federal Executive Council (FEC) of the Federal Republic of Nigeria has approved an increase in the nation’s Value Added Tax (VAT) to 7.2% from 5%.

The Minister of Budget and National Planning Zainab Ahmed disclosed this at the end of the cabinet meeting on Wednesday 11th September 2019.

“This is important because the federal government only retains 15% of the VAT — 85% is actually for the states and local governments and the states need additional revenue to be able to meet the obligations of the minimum wage.

“This process involves extensive consultations that need to be made across the country at various levels and also it will involve the review of the VAT act. So, it is not going to be implemented immediately until the act is reviewed.”

Speaking further, Ahmed stated that States need the revenue to be able to pay the new minimum wage.

“Following these assumptions, the total revenue estimate is the sum of N7.5 trillion for the year 2020.

“There will, of course, be the distribution to the three tiers of government based on the statutory revenue sharing formula as defined in the constitution and to this effect, it means the federal government will be receiving proposed aggregate of N4.26 trillion from the federal account and the VAT pool, while the states and the local governments are expected to receive N3.04 trillion and N2.27 trillion respectively.”

Earlier in June, Ahmed had stated that an upward review of VAT is a follow up on the agreement reached between the Federal Government and labour union following the minimum wage increase. She stressed that such a marginal increase in VAT would enable the government to handle the incremental cost of increasing wages.

If approved by the National Assembly, the new VAT rate will take effect in 2020.

COMPANIES OPERATING IN NIGERIA TO PAY 0.005% OF PROFIT INTO POLICE TRUST FUND

Companies operating in Nigeria will henceforth contribute a portion of their after-tax profits to the newly formed Nigeria Police Trust Fund aimed at improving funding and training of personnel of the force. This follows the signing of the Nigeria Police Force Trust Fund Act 2019 by President Muhammad Buhari.

The Nigerian Police Trust Fund Act (the “Act”) was passed by the National Assembly in April 2019.

The Act establishes a Fund, proceeds from which will be used to train police personnel and procure security machinery and equipment.

Imposition of a levy: The Act imposes a levy of 0.005% of the “net profit” of companies ‘operating business’ in Nigeria.

Funding from Federation Account and other sources: The Fund will also consist of 0.5% total revenue accruing to the Federation Account, in addition to proceeds from grants, intervention funds, aids, donations, investment income and so on.

Establishment of a Board: The Act establishes a board responsible for administering the Fund, making investment decisions, and fulfilling other objectives of the Act.

Duration of the Fund: The Fund will be wound up 6 years after its establishment. The assets and liabilities will be transferred to the Nigeria Police Force.

The Securities and Exchange Commission (SEC), has enjoined investors to make use of the Commission’s Complaints Management Framework (CMF), in expressing their reservations if any, in the capital market.

The Acting Director General of the SEC, Ms Mary Uduk who stated this in an interview, said the aim of the CMF was to address the complaints of Capital Market investors.

According to Ms. Uduk, the initiative is not only to help investors lay their complaints through the right channel but also assist the regulator in addressing the issues in the shortest time possible.

According to here, “Before this framework people complained to many offices, some go to EFCC, some go to the police, some go to any person that they think, even thugs, to come and get their investment back but then, it was not yielding fruit  and it was dragging the regulator on many fronts, we therefore saw the need to change our strategy and come up with a more robust framework.

“Our current complaints management framework will guide investors and ultimately protect their investments in the market. If you have questions about the capital market, you know where to go to”.

Uduk said as a step further, that the SEC also now closely monitors and supervises the capital market operators so that the investments of investors are not violated, misused or mismanaged in any way.

“We have now set up a framework where we now monitor them more regularly. We also have other initiatives arising from our 10-year master plan, which is to protect investors and bring confidence in the market such as the e-dividend mandate. When people invest in the Capital Market, they expect returns, they expect to make money. So, one of it is to be able to protect your dividend and get your dividend as and when due”.

Others the SEC Boss said, are the multiple subscriptions, National Investors Protection Fund that protect investors arising from problems that Capital Market Operators (CMOs) go through other than those of them that are brokers, as brokers are covered by the Nigeria Stock Exchange (NSE) .

“In the past, people subscribe for shares and bond in many different names. Some as many as 5, 6 different names and because of that they are not able to get the benefit of investing in the Capital Market. For instance if you have a bank account, a bank account recognizes only one name with only one BVN and therefore if you have different names they are not your real names and your share certificate does not carry those names and the banks does not recognize those names, you are not able to get the dividend of investing the market.

Therefore, we have given the stakeholders, the market a window of opportunity for people that engaged in multiple subscriptions to come and regularize those holdings that they have and consolidate them to be able to get the benefit of investing in the Capital Market”.

Uduk disclosed that many investors have taken advantage of the window leading to the regularization of 3.4bn so far and urged investors to take relevant steps to regularise their multiple accounts.

Recall that the Commission had earlier required CMOs to register with their relevant trade groups, to ensure compliance to these directives, SEC also requires proof of registration with these trade groups as a perquisite for operators to carry out transactions or make any submission at the Commission.

According to Uduk, all these steps are geared towards protecting investors in the market and making the Capital Market more attractive to would be investors.

In doing all these, the SEC Acting DG advised retail investors to invest in Collective Investment Schemes and Mutual Funds because those are managed independently by professionals and they are diversified thereby reducing risks.

“We also implore investors to take ownership of their investments. They have to be able to monitor their investments, attend annual general meetings as well as read the annual reports sent out to them.

“The SEC is committed to protecting investors in the work we do. We will keep working on our rules and the possibility of amending them when the need arises, we want more transparency in the market so that investors will feel comfortable and the market can be better” Uduk added.

The Securities and Exchange Commission (SEC), is set to implement the Roadmap for the  Financial Technology (Fintech) Industry, as it concerns the capital market.

This was disclosed by the Acting Director-General of the Commission, Ms Mary Uduk, at the Q2, 2019 Capital Market Committee briefing for capital market correspondents in Lagos.

Uduk said the Working Group to drive the implementation of the Fintech Roadmap will be chaired by Mr Adeolu Bajomo, the Vice-President of the Fintech Association of Nigeria.

She reiterated the support of SEC to the development of a robust Fintech Industry will be beneficial to the finance ecosystem.

Speaking further, she encouraged Capital Market Operators to embrace Fintech as an enabler and not competitor to their business.

Uduk also said that SEC is building capacity as a Commission to effectively interact with the Fintech sector.

According to her SEC will continue to engage the Fintech Association of Nigeria and all key stakeholders to get their inputs, as the roadmap implementation phase takes effect.

Other Highlights of the Meeting

She also stated that considerable progress has been made by SEC in the implementation of its consolidation of multiple shareholder accounts and electronic Dividend Mandate Management System (e-DMMS) as so far about 3.4bn shares have been consolidated.

Both measures were introduced as part of checking the growth and possibly eliminating the unclaimed dividend menace in the national capital market.

Giving an update on the activities of the Capital Market Masterplan Implementation Committee, (CAMIC) the Acting Director-General said there has been increased momentum in the area of driving the 10-year plan that is designed to reposition the Nigerian capital market.

At the moment she noted that SEC Nigeria and CAMIC has been engaging the Office of the Vice President and the Federal Ministry of Finance, on the prospects of exempting equities transactions from VAT payments.

Also, the CMC announced that SEC Nigeria will be releasing quarterly bulletin that focuses on the activities in the commodities market.

Under the Non-Interest Finance space, the Acting DG of SEC Nigeria hinted that the African Development Bank, AfDB is planning an issuance under the existing Sukuk Bond programme.

To strengthen the regulatory process in the capital market, Mary Uduk also informed the market correspondents that SEC Nigeria recently signed a Memorandum of Understanding (MOU) with the Nigerian Financial Intelligence Unit, NFIU.

The MOU will help to curb and combat terrorist financing, money laundering and fraud in the capital market.

She listed the following as some of the key resolutions at the end of the Q2, 2019 CMC meeting;

This report is a compilation of the dollar exchange rate at the official and parallel market from the 2nd of September to the 13th of September 2019.  The quoted parallel market prices are to serve as a guide to readers, as they represent the average price obtained daily from different black-market dealers in the Country.